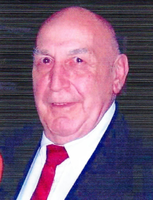 Francis E. (Chico) Moracco GENEVA-Francis E. (Chico) Moracco, 85, passed away peacefully at Geneva Living Center on Sun. (Sept. 16, 2018). Family and friends are invited to call on Sat. (Sept. 29) from 1pm to 3 pm at Palmisano-Mull Funeral Home LLC, 28 Genesee Street, Geneva. At 3 pm words of remembrance for anyone wishing to do so, followed by a prayer from Francis' co-members of the "The Order Sons and Daughters of Italy in America", then the folding and presentation of the flag by the Military Honors Team. Burial will be at the convenience of the family. In lieu of flowers, the family asks those to kindly consider making donations to: The Salvation Army of Geneva, Kids Camp P.O. Box 532, Geneva, NY14456. Francis (Chico) was born in Geneva on July 13, 1933, in the very house his father built at 7 Angelo St. He was the son of the late Anthony and Carmela (Guerrie) Moracco. A 1951 graduate of Geneva High School, he was a three time Section V Wrestling Champion. As a senior, he was named to the National All American High School Wrestling Team. While at Geneva High, he also lettered in football and track. Francis passed up a wrestling scholarship to Brown University to fulfill his military obligation during the Korean War. After serving two years in the Army as a Corporal, he attended SUNY Cortland on the GI Bill where he and his brother, John wrestled on the same team. He graduated from Cortland in 1960 and earned a degree in Education, teaching Social Studies after college. He returned to his hometown school as a volunteer coach and rebuilt the Panthers' wrestling program into a Section V force. He was also a New York State Wrestling Official in the Central Region from 1960-66. He left teaching to work in the General Service Administration, where he retired as a Division Chief in 1987, after stints in Buffalo, NY, California and Washington D.C. Chico and his wife Adeline returned to Geneva. Both have a strong sense of family and he particularly enjoyed the pleasure of his grandchildren's company and was passionate in regard to all children. He was inducted into the Geneva Sports Hall of Fame in 1996 and in February of 2009 he was inducted into the Section V Wrestling Hall of Fame. Francis is survived by his wife, Adeline (Patrizi) Moracco of 48 years; son, Steven B. (Carma) Cray of Avon, NY; daughter, Debra Cray-Sloane of Rochester, NY; siblings, John Moracco of Auburn, AL, David (Sharon) Moracco of St. Paul, MN and Barbara (Floyd) Siegfried of Seneca Falls, NY/ Charleston, NC; 6 grandchildren, 6 great-grandchildren; several nieces, nephews, cousins, special friends and neighbors. In addition to his parents, Francis was preceded in death by brothers, Edward of Geneva, NY and Albert Moracco of Trumansburg, NY; son, Thomas J. Cray of Rochester, NY.