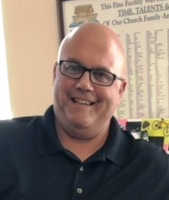 Bill was born on May 11, 1968, in Geneva and was a son of William M. and Louise Arlene (Cardinale) Palmer. He graduated in 1986 from Geneva High School, where he played football and wrestled for the Geneva Panthers. Bill served his country honorably in the United States Army from 1986-89. He met his wife, Joanna, of 18 years, while working together in New Mexico. Bill went on to become a NYS Corrections Officer at the Five Points Correctional Facility. Bill loved his children and nieces and nephews. He would attend all of their sporting events and talk sports with them. Bill was an avid sports fan and loved watching the New York Jets and New York Mets. He was a member of the Masonic Pocahontas Lodge in Seneca Falls.

Share Your Memory of
William
Upload Your Memory View All Memories
Be the first to upload a memory!
Share A Memory
Plant a Tree