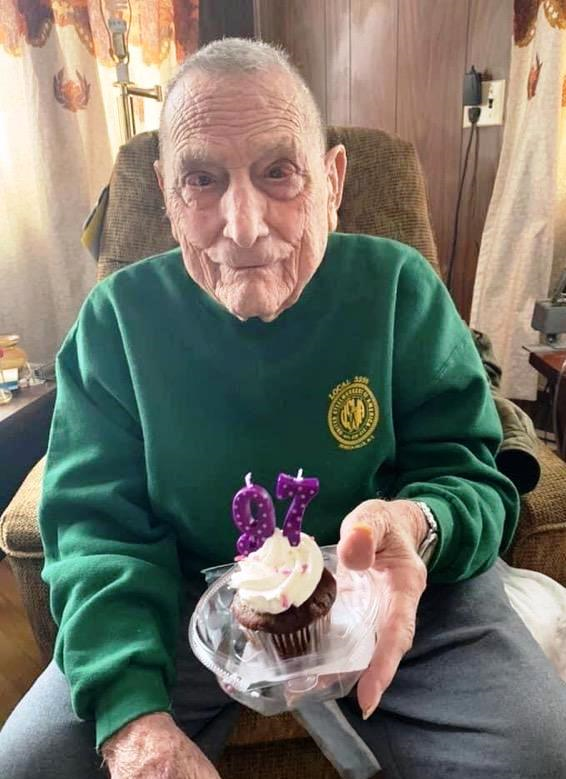 WATERLOO- Anthony "Tony" "Papa" T. Felice, 97, passed away peacefully on Wed. (Aug. 26, 2020), at home, with his family by his side. Friends may call from 12:30 to 1:30 p.m. Sat. (Aug. 29), at the Palmisano-Mull Funeral Home LLC, 28 Genesee St. Geneva. A funeral service will be in the funeral home at 1:30 p.m. Entombment will follow in St. Mary's Mausoleum, with full military honors. Those in attendance must wear a mask and follow the rules of social distancing. In lieu of flowers, contributions may be directed to Beverly Animal Shelter, 50 East River Road, Waterloo, NY 13165. Tony was born on Feb. 11, 1923, in Geneva and was a son of the late Frank and Amalia Felice. He enlisted in the United States Army, serving in the South Pacific, WWII. Tony worked as a truck driver for Howard's Express, then went on to work as a carpenter at the Seneca Army Depot. He drove bus for the Border City School and on weekends he enjoyed driving dump truck for Felice Trucking. Tony loved "junking" and scrapping metal. He bought his first brand new vehicle with the money he saved from "junking". In March of 2020, Tony received his high school diploma with his brother, Ralph, becoming the oldest person to receive a high school diploma from Geneva High School. He was devoted to his family and friends. Tony was a member of the Geneva American Legion and a life-member of the Border City Fire Dept. He is survived by sons, Thomas (Linda) Felice of Waterloo and Gary (Pinky) Felice of Geneva; loving brother, Ralph Felice of Border City; sisters-in-law, Sandy Prete of Geneva and Mary Felice of Seneca Falls; brother-in-law, John Prete of Syracuse; granddaughters, Colleen Smith of NC, Julie (Lloyd) Snyder of Geneva, Jennifer (Bob) DeCook of Geneva and Amanda (John) Savaria of Geneva; great-granddaughters, Erika (Trevor) Moffitt of NC, Corinne Smith (Greg Mayo, Jr.) of Junius, Cassie (Peter) Henry of Geneva, Gabby Smith (Chuck Edwards) of NC, Sydney Snyder of Geneva, Summer Felice-Irwin of Phelps, Sierra DeCook of Geneva, Hailee DeCook of Geneva and Brynlee Savaria of Geneva; great, great- grandchildren, Riley, Greg, Owen Anthony, Nolan, Baby Gwynevive and baby Connor Thomas; several nieces, nephews and loving friends. Tony was predeceased by his wife, Josephine (Prete) Felice in 1983; brothers, Joseph, Fred, Richard and Nicholas; sister, Carmie.
To send flowers to the family or plant a tree in memory of Anthony Felice, please visit Tribute Store
Saturday
29
August

Share Your Memory of
Anthony
Upload Your Memory View All Memories
Be the first to upload a memory!
Share A Memory
Send Flowers
Plant a Tree