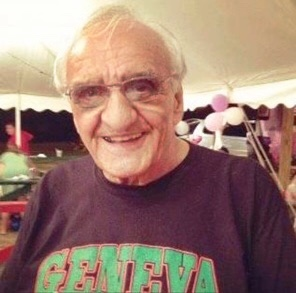 Please share a memory of John to include in a keepsake book for family and friends.
View Tribute Book
John William Gregoria GENEVA- John William Gregoria, 86, passed away peacefully on Fri. (Sept. 11, 2020), at the Huntington Living Center in Waterloo. In honoring his wishes, there will be no prior calling hours. A graveside service will be held at 1 p.m. Fri. (Sept. 18), in St. Mary's Cemetery, Geneva. John was born on May 1, 1934, in Geneva and was the son of the late John and Helen (Venturino) Gregoria. He served his country in the United States Army. While stationed in Germany in 1956 he visited family in Italy and was received by Pope Pius at the Vatican. He owned and operated "Gregoria's Italian Specialties". After John retired, he went on to work at Wegmans Deli, where he loved seeing familiar faces of family and friends. John was very proud of his Italian heritage. He was a founding member and past president of the Sons of Italy in Geneva. Every summer he took great pleasure in helping to put on the Sons of Italy Italian festival with a cannoli in his hand and a smile on his face. John absolutely loved cooking and feeding his loved ones. He will be truly missed by the entire community. He is survived by his daughters, Gina Gregoria of Geneva, Joanne (David) Maher of Geneva and Vicky McDougal of Seneca Falls; grandchildren, Jayden Gregoria, Isiah Grady, Mariah (Mario) Fratto, Malorie Maher, Sean (Jessica) and April McDougal and Robert (Jen) DeCook; great-grandchildren Derek and Ryder McDougal and Hailee DeCook; nieces, Beverly Jaynes, Lorraine Heatherly and Sally (Greg) Strickland; nephews, Bobby (Judy) Jaynes, Sammy (Kathy) Cosentino and Paul (Carol) Cosentino, and several other nieces and nephews. John was predeceased by his wife Beverly Serafino Gregoria; sisters, Maggie (Gene) Kelly, Patricia Carpinelli and Mary "Peppy" (Emile) Jaynes. The family would like to acknowledge the special care John received in the SNU at the Huntington Living Center.
To send flowers to the family or plant a tree in memory of John Gregoria, please visit Tribute Store
Friday
18
September