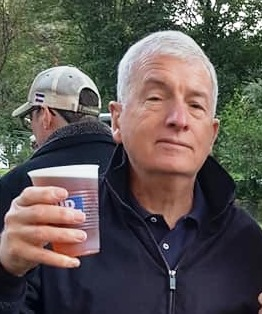 Please share a memory of Bruce to include in a keepsake book for family and friends.
View Tribute Book
Bruce "Dutch" Davie, 73, beloved husband, father and 'Poppy' passed away on Oct 11th, 2020. He passed peacefully, surrounded by his loving family, after a courageous fight with brain cancer (GBM). Family and friends whose lives were touched by Dutch are welcome to reminisce and grieve at Palmisano-Mull Funeral home LLC on Thurs. Oct 15th from 4-6 pm. A mass of Christian burial will be held at St. Stephens Catholic Church on Friday Oct 16th at 10:30 am followed by burial services at Sampson Veterans Memorial Cemetery. In lieu of flowers, please consider making a donation to end brain cancer, 16150 NE 85th Street, #201, Redmond, WA 98052, or visit EndBrainCancer.org . He was born in Geneva, NY on April 13th, 1947 and quickly earned the nickname 'Dutch' while learning to talk. His brothers teased 'he sounded like a little Dutch boy' and from then on, he was known as 'Dutch'. Dutch graduated from Geneva High School in 1965 then served his country in the Airforce from 1966 to 1970. He worked at Seneca Army Depot as Chief in the Industrial Plant Equiptment Division. Dutch retired in 2009 from Defense Logistic Agency as Director of Maintenance Division in Mechanicsburg, PA. He loved children and was very proud to coach Geneva Little League for many years. Dutch was married to his loving wife of 52 years Barb (Oddi) Davie . Together, they raised two wonderful children Michelle (Andy) Candidori and Brad (Moon) Davie of whom he was very proud. Dutch cherished his 4 granddaughters, Olivia and Sofia Candidori, and Mayson and Brielle Davie. Even though Dutch was taken too soon, he lived an extraordinary life travelling, socializing, golfing and fishing with people who adored him, his wit and his enthusiasm for spending time with those he loved. In addition to his brother Michael (Bethany) Davie, he is survived by his loving extended family Mike and Marien Canale and their 4 daughters, whom he thought of as his own, Marla, Mia, Marisa and Michele. He was also survived by many friends who enriched his life and whom he loved dearly. He was preceded in death by his father Edward, his mother Dorothy and his older brother John; mother-in-law and father-in-law, Joyce and Robert Oddi.
To send flowers to the family or plant a tree in memory of Bruce Davie, please visit Tribute Store
Thursday
15
October

Share Your Memory of
Bruce
Upload Your Memory View All Memories
Be the first to upload a memory!
Share A Memory
Send Flowers
Plant a Tree