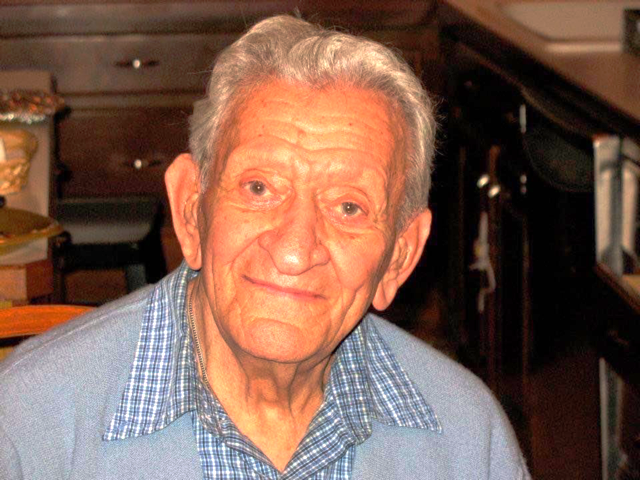 Obituary of Anthony A. Guidice

Please share a memory of Anthony to include in a keepsake book for family and friends.
View Tribute Book
GENEVA - Beloved husband, father and grandfather, Anthony Arthur Guidice, died Dec. 29, 2020, at Geneva Living Center North of Covid-19. His wife of 77 years, Vivian Davoli Guidice, was at his side. In lieu of flowers, the family asks that you save a life: Wear a mask, wash your hands and social distance. A celebration of his life will take place when it is safe to do so. "Tony" was born in Morrisdale, Pa., on April 12, 1923, the son of Bruno Guidice and Genevieve (Jenny) Perry. Jenny died at the age of 19, giving birth to Tony and his twin sister Jean. Tony and his sister spent many years in and out of orphanages. When he found out that his mother's family owned Pronti's restaurant in Geneva, he ran away. He made the first of many trips to Geneva beginning at the age of 8. He loved pointing out spots on the highways where state Troopers found him. Eventually, Tony moved in with his grandmother, Angelina Perry on North Genesee Street. When he saw teen-ager Vivian in a car with a group of young people, he announced, "I'm going to marry that girl." Vivian would come home to find her parents on the front porch chatting with Tony, who would later say, "get the mother and you get the girl." World War II put everything on hold. Underaged Tony forged his grandmother's name on military papers so he could enlist in the Navy. During his three-year stint, Tony served aboard the SS Argon, SS Holland Park, SS Western Sword and SS Julia Ward Howe, among others. During a shore leave, he and Vivian married in Yonkers, NY., on Sept. 4, 1943. When Germans torpedoed the SS Julia Ward Howe, Tony was listed as missing in action as he floated in a raft with surviving crew members in the Atlantic. The men were picked up days later by a neutral Portuguese ship and returned home. He was honorably discharged on Oct. 23, 1945, given $63.81 in pay and a $3 travel allowance. After a tumultuous childhood, Tony landed in the middle of Vivian's huge Torrey Park family — she had 11 sisters and brothers. Tony couldn't have been happier. He loved the Davoli clan and he loved Geneva. He worked at the Hulse Manufacturing Co. and later became a barber (just in time for the Beatles and their long-hair style, he joked). Tony's greatest joy was his family. He loved his wife to his dying breath and held her hand every chance he got. He bragged about his daughters. He was a fabulous dancer and was the most popular man at big Italian weddings. He was kind and gentle and always had a smile on his face. A granddaughter called him her knight in shining armor. He is survived by his wife, Vivian; daughters Toni Marie Guidice of Syracuse; Linda Bertino (Anthony) of Geneva; four grandchildren Jennifer Welch of Geneva, Lynn Higgins of Fairport, Alix Guidice and Maya Falkner-Guidice both of Syracuse; five great grandchildren: Michael Leisenring, Avery Arthur Guidice, and Luke, Owen and June Higgins; and countless nieces and nephews. Tony would have met his first great-great grandchild in April. In addition to his parents, Tony was preceded in death by his sisters Mary Rose Porto, Genevieve (Jean) Dickson Hancy, Lucy Bonadio and brother Bruno Guidice.
To plant a beautiful memorial tree in memory of Anthony Guidice, please visit our Tree Store

Look inside to read what others have shared
Family and friends are coming together online to create a special keepsake. Every memory left on the online obituary will be automatically included in this book.
View Tribute Book
Services for Anthony Guidice
There are no events scheduled. You can still show your support by planting a tree in memory of Anthony Guidice.
Plant a tree in memory of Anthony

Share Your Memory of
Anthony
Upload Your Memory View All Memories
Be the first to upload a memory!
Share A Memory
Plant a Tree