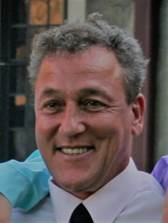 Please share a memory of John to include in a keepsake book for family and friends.
View Tribute Book
GENEVA – John P. "Campy" Campbell, Jr, 60, of Geneva, passed away peacefully, at Geneva General Hospital, on Sunday, December 12, 2021, after a short illness. His sister and nephew were by his side. Family and friends may attend a prayer service on Saturday, December 18, 2021 at 10:30 am at the Palmisano-Mull Funeral Home, 28 Genesee Street, Geneva, followed by a burial at Oaklawn Cemetery. Contributions may be directed to Our Lady of Peace Parish, 130 Exchange Street, Geneva, NY in John's memory. John was born on May 23, 1961, in Geneva NY, and was the son of the late John (Jerry) and Mary (Bumbie Manino) Campbell. John was a lifelong resident of Geneva and graduated from Geneva High School in 1979. He enjoyed playing baseball and was on the golf team and a diver on the swim team. John lived his life to the fullest. He had an energetic personality. He was a jack of all trades having many different jobs. Co-owner of Campy's Corner Store, Seafood Manager at Wegmans, Phlebotomist at Geneva General Hospital, a painter, carpenter, worked construction, Grocery Manager at the Commissary at Fort Irwin, California, and Assistance Manager of the Canteen at the West Palm Beach VA Medical Center. He had one true love and that was golf. He has been golfing since he was 10. He loved the game and knew everything about it. He was a scratch golfer and had two holes in one! He also taught golf lessons. He was a good cook, even making homemade pasta. After John's father passed, he took on the roll of Santa. For the past 25 years, every Christmas he would put on the red suit and enjoyed seeing the children light up with excitement as Santa arrived! He was a great uncle and enjoyed spending time with his nephews, Scott and Cory. He was always there for them, sports, school projects, vacations, etc. John is survived and will be missed by his sister, Cindy Campbell, nephews Scott Ludwig and Cory Ludwig (Courtney Simpson), great nieces Ryleigh and Braelynn, many cousins and friends. John is predeceased by his parents. Cindy would like a special Thank You to the Staff at Geneva General Hospital, Emergency Room and ICU for the exceptional care and compassion given to John.
To send flowers to the family or plant a tree in memory of John Campbell, Jr., please visit Tribute Store
Saturday
18
December