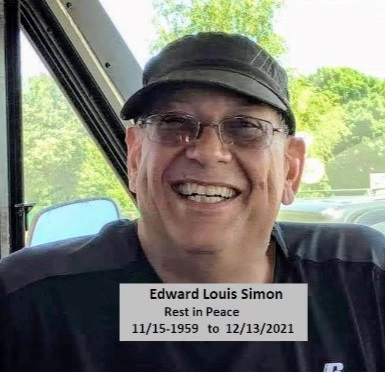 Please share a memory of Edward to include in a keepsake book for family and friends.
View Tribute Book
Edward L. Simon Geneva - Edward Louis Simon, 62 years old, passed away Monday, Dec 13, 2021 at Geneva General Hospital. In honoring his wishes, calling hours for the public will be Thursday, December 16th, 2021 from 4-7 pm at the Palmisano-Mull Funeral Home LLC, 28 Genesee St. Geneva, NY. A Mass of Christian Burial will be held at 1 pm on Friday, December 17th, 2021 at St. Francis De Sales Catholic Church. Please follow all Covid-19 rules in the funeral home and church. In lieu of flowers, the family asks that donations be made to St Francis-St Stephens School, 17 Elmwood Ave, Geneva, NY 14456. Ed “Fast Eddy” was born on November 14, 1959 in Geneva, NY, son of late William A. and Amelia (Pasqua) Simon. He grew up in Geneva and attended DeSales High School, graduating in 1977. Ed chose a career in automotive mechanics after the completion of the BOCES program. He worked construction with his father at Michelle Construction, driving dump trucks and operating heavy equipment. Ed possessed a natural mechanical ability and first used his talent in the Geneva area, working for Robson’s Garage. He expanded his talent while working for an import repair shop, specializing in Italian cars. This knowledge proved to be very lucrative in his future business ventures. After marrying his high school sweetheart, Laurie, they decided to relocate to Plano, Texas, driving all of their worldly belongings in a two and a half ton dump truck, caravan-style. Initially, Ed worked in the booming Texas construction industry - all while repairing cars in the driveway of their home. He opened a mobile repair business named Fast Mobile Repairs, thus acquiring his famous and much loved nickname “Fast Eddy”. Mobile Repair grew into owning his own European Car Repair Shop in Plano, Texas. Ed's priorities were his two children, Aaron and Jourdan. The entire family was directly involved in the family business. Laurie operated the front of the shop as a service writer and bookkeeper while their two kids played in the waiting room. Eddy’s love for cars grew to a hobby of purchasing expensive “fixer uppers” like Jaguars, Porsche, and Mercedes Benz. In the late 90’s the family moved back to Geneva where Ed’s other love of music bloomed. Ed was an avid supporter of the local music scene, supporting local bands by volunteering his time helping with lighting and stage performance. Every Friday and Saturday night were his primetime venues. His other hobbies included boating, swimming, fixing and tinkering. He is survived by his former wife Laurie (Gay) Simon and their son Aaron (Heba) Simon, and their daughter Jourdan Simon and her partner Billy Kwizera; his siblings - Julia (Donald) Guerrieri of Geneva; Michael Simon of Geneva, William (Patricia) Simon of Clifton Springs; Christine (Ralph) Lyman of Henrietta; grand-daughter Elia Simon; special adoptive daughters Jessica and Jasmine Lanza and special friend Theresa Dewitt-Font.
To send flowers to the family or plant a tree in memory of Edward Simon, please visit Tribute Store
Thursday
16
December

Share Your Memory of
Edward
Upload Your Memory View All Memories
Be the first to upload a memory!
Share A Memory
Send Flowers
Plant a Tree