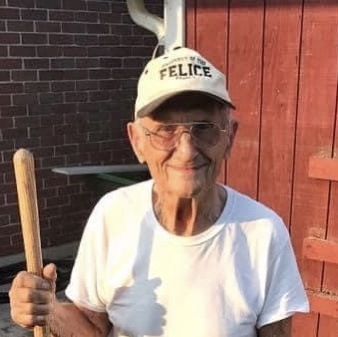 Obituary of Ralph A. Felice

Please share a memory of Ralph to include in a keepsake book for family and friends.
View Tribute Book
BORDER CITY- Ralph A. Felice, 96, passed away peacefully at home on Wed. (April 27, 2022), at home, with his loving family by his side. Friends may call from 3 to 7 p.m. Mon. (May 2), at the Palmisano-Mull Funeral Home LLC, 28 Genesee St. Geneva. A Mass of Christian Burial will be celebrated at 10 a.m. Tues. (May 3), at St. Francis De Sales Catholic Church. Burial will follow in Oaklawn Cemetery with full military honors. Ralph was born on Aug. 28, 1925, in Geneva and was the son of the late Frank and Amalia (Marciano) Felice. He served his country in the United States Army and was a proud veteran of WWII, where he survived as a Prisoner of War. Ralph worked as an electrician and retired from the Seneca Army Depot after 25 years. He was a very modern man who enjoyed Facebook and TikTok on his phone. Ralph also enjoyed growing garlic and spending time with his family. One of his most memorable moments was having his grandson, Cameron escort him on Honor Flight Mission #57. He was a 67 year life member of the Border City Hose Co. He is survived by his daughter, Christina "Tina" Felice of Border City; grandchildren, Derek J. (Jennifer) Carlson, Tara Marcuccilli and Cameron R. Felice; great-grandchildren, Owen and Zoey Carlson, Killian, Ireland and Jack Carlson, Theo Marcuccilli. The family would like to acknowledge the exceptional care that Corinne Smith, Michaela Gantz and Debi Bixby gave to Ralph. Ralph was predeceased by his wife of 65 years, Rose Felice; daughter, Susan Carlson; great-granddaughter, Emilia Carlson; brothers, Joe, Anthony, Frederick, Richard and Nicholas Felice; sister, Carmela DeSain.
To send flowers to the family or plant a tree in memory of Ralph Felice, please visit Tribute Store
Monday
2
May

Share Your Memory of
Ralph
Upload Your Memory View All Memories
Be the first to upload a memory!
Share A Memory
Send Flowers
Plant a Tree