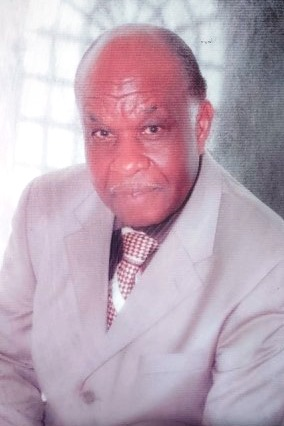 Please share a memory of Bishop Harry to include in a keepsake book for family and friends.
View Tribute Book
GENEVA- Bishop Harry L. Gramling, 83, passed into the Arms of his Savior on Wed. (June 8, 2022), at Geneva General Hospital. Friends may call from 4 to 7 p.m. Thurs. (June 16), at the Palmisano-Mull Funeral Home LLC, 28 Genesee St. Geneva, NY. A funeral service will be held at 10 a.m. Fri. (June 17), at First Love Church of God's Revealed Truth, 125 Border City Rd. Geneva, NY. Burial will follow in Glenwood Cemetery. Bishop Harry L. Gramling was born in Madison, Fla. and was born into the family of the late Benjamin and Anne Russ. His mother was the late Beaulah Lee Russ of Geneva, NY. Bishop Harry L. Gramling grew up in the C.O.G.I.C. under the leadership of Elder Handy of Geneva, NY. In 1970, he was joined together in holy matrimony with his beautiful wife, First Lady Marcell Gramling. God blessed them with seven wonderful children and thirteen beautiful grandchildren. Bishop Gramling accepted the Lord in 1971, as the Lord led him; he began his evangelizing ministry going from house to house sharing the Gospel of Jesus Christ. Many people followed him. Bishop was moved by the Lord to begin a church, for the Lord told him that he had nowhere for his people to go and be kept. Through the move and obedience to the Lord, in 1980 he began to pastor his first church called, "First Love C.O.G.I.C." The church began in his home and then soon relocated to 41 Lewis St., then to 5 Genesee Park in Geneva, NY. In 1998, Bishop Harry Gramling became Bishop over God's Revealed Truth Inc. As the Lord God increased the ministry, the Lord moved him to open up another church in Rochester, NY called, "Keys to the Kingdom Church of God's Revealed Truth Inc. Delivering Word Church of God's Revealed Truth Inc., is located at 5 Genesee Park in Geneva, NY. Bishop Harry Gramling is also the Bishop and pastor of the headquarter church, First Love Church of God's Revealed Truth Inc., located at 125 Border City Rd. Geneva, NY 14456. Bishop Harry L. Gramling established many programs to meet the needs of the people; including, Wednesday night bible study, Sunday services, Ministerial meetings, marriage classes and many more with the support of his wife, First Lady Marcell Gramling. Bishop Gramling was fully dedicated to the ministry of winning souls to Christ. His dedication and diligence was shown in his daily living, leading by example. He is survived by his devoted wife of 52 years, First Lady Marcell (Brinson) Gramling of Geneva; children, Joann (Andrew) Russell of Lincoln, NE, Brenda (Michael) Strongs of Geneva, Denine Gramling of Geneva, Harry (Markie) Gramling, Jr. of Geneva, Mark Lee (Paulette) Gramling of Geneva, Keith (Kassandra) Gramling of Seneca Falls and Derick Gramling of Rochester; grandchildren, Corie Dexter of Waterloo, Nikia Dexter of Lincoln, NE, Michael Gramling of Geneva, Shaynon Gramling of Jersey City, NJ, Alexa Gramling of Atlanta, GA, Sean Gramling of Geneva; Malik Gramling of GA, Ka-dyn Gramling of Seneca Falls, Savannah Gramling of Geneva, Nevaeh Gramling of Geneva, Serina Jackson of Rochester, Sharde Granison of Columbus, OH, Joshua Jackson, Janell Blodgett, Janisha Jackson, Jamel Jackson and Javon Jackson; several great-grandchildren; a host of nieces, nephews, cousins, in-laws and close friends. Bishop Gramling was predeceased by his grandmother, Anne Russ; grandfather, Benjamin Russ; mother, Beaulah Russ Kent; sister, Rossie Wiggins; aunts, Annie B. Russ and Beatrice Russ; uncles, Willie Russ and James Russ.
To send flowers to the family or plant a tree in memory of Bishop Harry Gramling, please visit Tribute Store
Thursday
16
June

Share Your Memory of
Bishop Harry
Upload Your Memory View All Memories
Be the first to upload a memory!
Share A Memory
Send Flowers
Plant a Tree